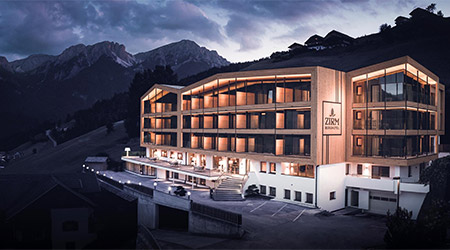 The landscape and surroundings are especially beautiful in the wide basin of the Brunico plain. In San Lorenzo di Sebato you will find wide fields, small hills and the romantic and wild river source of the Rienza river. This delicate landscape is particularly well suited for your holidays full of walks and excursions.

Excursions for example to the near town of Brunico, to the church Maria Saal at the edge of the forest, which was once a settlement. Another possibility is offered by the village of Stefansdorf, where you pass romantic hill chains and rustling forests with a great variety of plants.

In ancient times the "Reti" population lived in this village and they had already understood the strategic advantage of the villages position.

The Romans, the new masters of Sävaten, arrived in 15 B.C. and up to the 5th Century this remained the camp of "Sebatum". A milestone, remains of civil constructions and many coins from that time still remain to this day as reminders of the settlement.

Throughout the course of Christianization the settlement was consecrated to San Lorenzo – "Laurentius" and the name survived all of the misfortunes of the following centuries.

In the Middle Ages, the areas destiny laid, in good and in bad times, in the hands of the castles of San Michele and Sonnenburg where the Earls of Pusteria and Lurn used to tarry. These were the courts where all of the main decisions for the Puster Valley were taken.

These days at the Sonnenburg castle, you can still find some remains of the Benedettini convent, founded by Vokold in 1083. A special jewel is in possession of the parish church: Mother Mary of the grapes on the throne with her child on the main altar, created by Michael Pacher in 1462.

It may also interest you: